Is It a Weed? Three Common Colorado Noxious Species 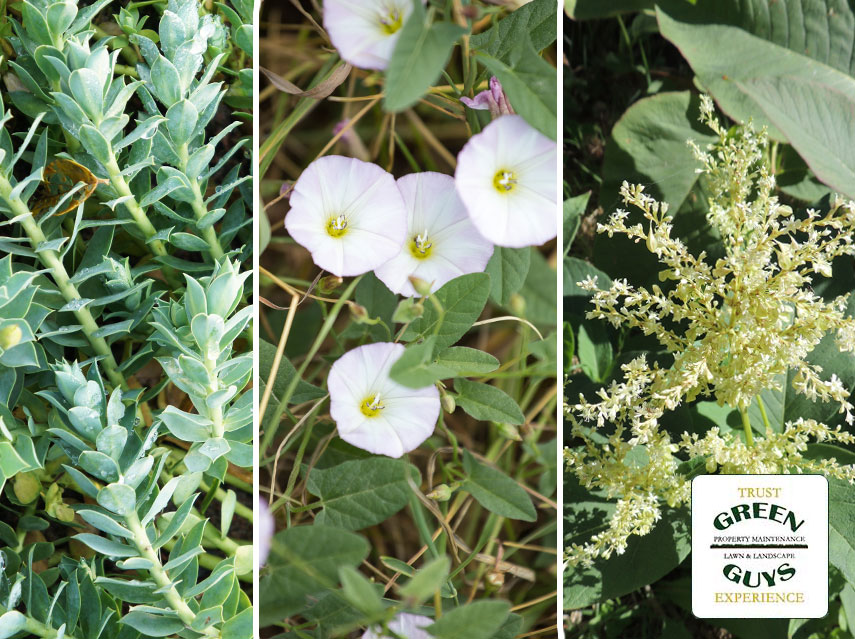 The outdoors are full of color, pollen, and life! Summertime in Colorado is a buzzing and thriving as the foothills and plains are fed by afternoon rainstorms and seas of snowmelt finding their way down the mountains. This means great things for your grass and trees and plants… it also provides everything necessary for noxious weeds to grow and spread.

A noxious weed is one that causes harm to local agriculture, ecosystems, animals, or people. In Colorado, noxious weeds are classified in lists according to the harm that they pose to local environment. List A species, for example, are considered dangerous enough to the State of Colorado’s environment that they are required to be eradicated. Many of those List A species are common in the Front Range!

As you tackle the weeds this season, keep an eye out for the species below: 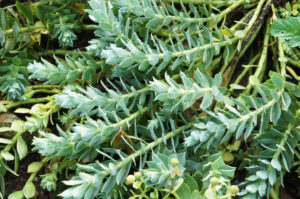 Myrtle Spurge is a low-lying perennial with thick blue-green leaves that resemble many succulents. In the spring, stems grow out from their central taproot, producing several small yellow buds. These flowers can spread seeds up to fifteen feet, making this a fast-growing, and widespread weed.

It’s fast growth and spread is what makes this invasive species a danger to the local ecology. It is popular as an ornamental plant for xeriscaping, but it quickly and easily spreads from front yards and gardens and spreads to natural areas. There, it beats out native species for water and nutrients, in turn limiting the amount of green forage available for the mammals, insects, and other animals that rely on them for food and shade. 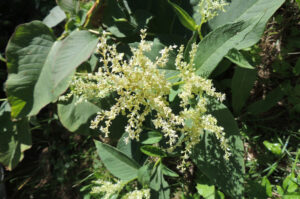 This weed has been cropping up along waterways in the Front Range, and in the news as response to its invasion grows. Beyond soaking up the resources that native plants usually receive, Japanese Knotweed is dangerous to buildings. Its roots can find weaknesses in concrete, and pry apart a home’s foundation.

Knotweeds are difficult to remove. They grow rhizomatically through a complex underground root system, so removing them can cause degradation of the land. They can reproduce from even a very small part of their rhizome, so in many cases, pulling them isn’t completely effective either. Eradicating them requires that the whole plant be completely killed. In many cases, this requires cutting down the plant, and using a biological herbicide to kill the plant.

See the State of Colorado Department of Agriculture’s online guide to Bindweeds for more information on eradication.

Field Bindweed is not a List A species, but a List C species, which according to the State of Colorado Department of Agriculture is a species 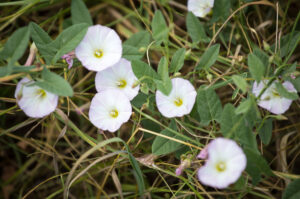 “…for which the Commissioner, in consultation with the state noxious weed advisory committee, local governments, and other interested parties, will develop and implement state noxious weed management plans designed to support the efforts of local governing bodies to facilitate more effective integrated weed management on private and public lands. The goal of such plans will not be to stop the continued spread of these species but to provide additional education, research, and biological control resources to jurisdictions that choose to require management of List C species.”

Basically, it’s weeds that have been identified as problematic, but of low concern. For gardeners or homeowners with more fragile plants in their landscaping, however, Bindweed can cause a lot of headaches!

This vining plant resembles Morning Glories with its leaves spade-shaped leaves and light, multi-colored bell-shaped flowers, but this noxious weed will wreak havoc on any plants it finds. It grows close to other plants, its roots pulling more water and nutrients than its companions, and its vining stem using them for support and to grow higher into the sunlight. Just a few bindweed vines can strangle out a plant in a few days.

Bindweed can be removed easily. As soon as you see one of these creeping vines with spade-shaped leaves growing, grab it firmly by the stem as close to the ground as possible, and pull straight up to remove the plant and its long roots.

You can find the State of Colorado Department of Agriculture’s full list of noxious weeds on their website, as well as individual guides on each species.

Related posts
Garden Tips for September
September 1, 2020
Video: How To Quick Drain Your Sprinkler System
October 8, 2018
Save On Water With Sustainable Landscaping
May 13, 2018
Plan For Your Spring and Summer Landscaping
February 10, 2018
How Much Water Is In Snow?
January 19, 2018
Roses: Winter Care
November 24, 2016

Search for Tips and Information from Green Guys